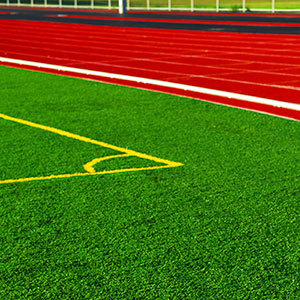 Recently the media has found a renewed interest in the safety in utilization of crumb rubber as a synthetic turf infill material. Understandably so, when you consider that millions of weekend jocks, collegiate athletes, and hobbies spend days on end diving, crawling, and sprawling on the surface. Media outlets wanted to investigate any potential connections with chronic diseases. While U.S. EPA studies have found crumb rubber to be safe, researchers acknowledge in their report that additional testing would be required to determine its long-term safety with certainty. The report cites that a large number of variables are difficult to isolate during on-site testing, including surrounding environments, introduced chemicals, and the material make-up of each individual application.

A recent independent study by a French laboratory has offered new evidence to help support the EPA’s findings. The study measured toxicity levels against the strict European Union EN 71-3 standards, which has set strict limits for rubber and plastics in children’s play toys. These standards, established in 2013, are widely recognized as the most stringent testing requirements in the world. The chemical analysis study and report indicated that crumb rubber met or exceeded the standards, making it safe for daily use by children.

Crumb rubber advocates are excited by the results, which they are using as evidence to help offset what they call unfounded media reports regarding potential safety issues of the material. “We are happy with the results because, together with the chemical science and research that is readily available, they confirm for us, our Board, and the parents of our students that our turf field is safe for children of all ages for play and competition,” said Christopher Shannon, Headmaster, Lower Canada College.

A wide range of studies will continue to monitor the impact of sports materials as they continue to be developed. Advocates of synthetic turf fields believe they not only allow for a more comfortable year-round playing surface, but they also can significantly reduce water utilization, minimize the use of pesticides or chemicals, and re-purpose up to 25 million used automotive tires each year. The environmental improvements, paired with recent evidence-based studies, make synthetic turf a logical choice for the future generations.

This study was originally mentioned and brought to light by the Atlanta-based Synthetic Turf Council. The Synthetic Turf council helps to support and promote the industry, its vendors, and the end users. They rely only on current, credible, and independent research in their findings.