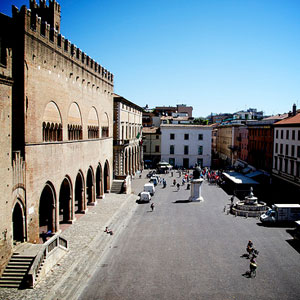 There are two reasons why Bologna is a convenient start point for traveling around Italy.
Firstly, Bologna has a huge transport nodal point that makes it is easy to reach both the northern and the southern regions of Italy from the city by car or by train.
In addition, it is convenient to take short day trips to the other cities in Italy. In this regard, it is not only easy to reach the nearest outskirts of Emilia Romagna region, which is the administrative center of Bologna, but also Florence, Milan, Venice, and even Rome.

Secondly, unlike Venice, Florence or Rome – Bologna is not so popular among tourists. So, it is much better and cheaper to stay over there.
Along with that, Bologna and the neighboring cities are no less interesting than the other well-known cities from the historical and cultural point of view.
Taking into consideration all the above mentioned factors, you can take a huge number of routes from Bologna. Now let’s consider a few of them.

Rimini combines modern travelling industry and famous past. It allows to alternate a beach vacation with a nightlife full of entertainments, as well as with tours aimed at perception and understanding of the values ​​of the past.

Each season in Rimini is characterized by certain kind of recreation. Beach season lasts for the whole summer, since the end of May until mid-September. In autumn the rural festivals are organized at the coastal areas. In winter Rimini is especially full of events, such as New Year, Christmas celebrations, fairs and festivals. New Year’s Eve is truly unique and extraordinary there, since everyone welcomes the first day of the year, watching the sunrise from the sea.

Rimini has everything for excellent recreation and entertainment: you may go in for sports, visit theme parks, relax in the hot springs, take guided tours and much more.

Bologna – Ravenna (Distance – 84km)
Ravenna is an ancient city with a glorious past. Like Venice, Ravenna was founded in marshy lands and marine lagoons, and many buildings of the city still keep the remains of the wooden piles in their foundations. Today Ravenna welcomes the guests according to its own rules of hospitality.

The first impression of Ravenna may be not really charming. In the beginning, the stories about big concentration of cultural and historical monuments may seem illusory: noisy train station, common street buildings, city bustle typical for most European cities… Nevertheless, you should stay patient and try to look at Ravenna not from the standard tourist viewpoint. Only then, having plunged into the local atmosphere, you will discover Ravenna as majestic city in the distant past and the capital of the no longer existing empire.

You need to be mentally prepared to assess all this beauty with your own eyes. Before going to Ravenna, you need to realize clearly that you go there not for entertainments, but to touch the eternity.
Of course, it’s advisable to go to Ravenna by your own car. Using online car rental service at Bologna you can save significant amount of money and start the trip at any suitable time.

Bologna – Ferrara (Distance – 54km)
Italian town of Ferrara is cozy and beautiful. Its ancient streets are saturated with medieval era. Beautiful cathedrals, squares and palaces were built during the Renaissance. Today the city of Ferrara is under the protection of the mighty city walls with a total length of about nine kilometers.

Ferrara is also known as the place that may reveal plenty of interesting things, including several ancient festivals that always attract tourists. For example, Palio horse race that takes place in the late spring and Ferrara Buskers Festival which is organized during the summer months.
In Ferrara there is lots of fun for any taste. It will be comfortable and pleasant for anyone to stay there, regardless of the interests: Ferrara offers entertainments both for young people and families with children, as well as for loving couples who are looking for romance.

Bologna – Modena (Distance – 48 km)
Modena is another amazing place in Emilia-Romagna region and the pride of Italy. It is deservedly compared with Bologna, because there is almost the same number of attractions and old universities.

Modena is a home to the head offices and factories of the largest Italian car manufacturers such as Ferrari, Pagani, Maserati, De Tomaso and Lamborghini. Everyone has an opportunity to visit Ferrari museum, in which the legendary cars and engines are displayed. You can even take a ten-minute ride on one of the super cars for just €50.

Apart from that, Modena is home to the leading companies in Italy that deal with ceramics, textiles, medicines and processing of pork. Therefore, due to the large number of these factories, the city may seem at first glance not to be meant for tourists. But this feeling disappears as soon as you get closer to the center of Modena.
Also you shouldn’t forget about gastronomic pleasures in Modena. There are many wineries in the neighborhood where you can witness the process of Lambrusco produce, which the land is famous for, as well as the other fine sorts of wine.

Bologna – Reggio Emilia (Distance – 73km)
This picturesque town with stunning surroundings is located near Modena. The road to the city goes past Pietra di Bismantova, which is the main base for climbing in Emilia-Romagna. The valley, through which the road to Reggio Emilia lies, is full of attractions.

Reggio Emilia has a well-developed infrastructure and there’s lots of fun both for those who love partying and for the fans of sightseeing. The city is very suitable for nature lovers, who can enjoy walking there all day long till the sunset, breathing clean air, and reviving positive energy.

As you see, it is not always necessary to go to the largest and most well-known cities of the country to get closely acquainted with it. Sometimes it is useful to avoid the hackneyed tourist routes and try something new. And Bologna offers you dozens of such opportunities!

Author Bio: Lily Berns has traveled a lot arond the world by car. Now she uses her extensive experience to write travel articles.