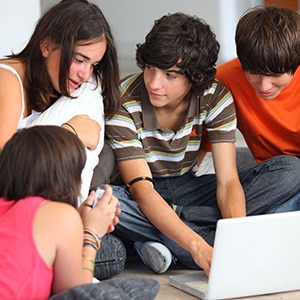 Let’s start with what the heck a “Let’s Play” is: it’s simply watching someone else playing a video game.

For most of us older folks, the concept of watching others play video games as entertainment is baffling. We’re used to Friends and Seinfeld, and other big network TV shows that we gathered around every Thursday night, not voyeuristically attending a gaming session.

LP Youtubers typically play a game while they video tape themselves for others to watch. Their faces are often captured in one of the screen corners. That’s really it.

These New Media entertainers are literally making millions of dollars off of millions of subscribers and fans. And, it’s not just a passing fad.

The biggest thing to keep in mind is two distinctions: some are kid friendly and some ARE NOT!

To give an example, you would think that Stampylonghead could be suspect material for the under aged and Yogscast sounds benign. Well, it’s actually just the opposite.

Stampy, also known as Joseph Garrett, is the twenty-something awkward brit that has risen to Youtuber star status with his Stampy Cat character, created by his father. Joseph started recording his first playing of Minecraft in what he called his Lovely World.

At first, he didn’t realize that kids would gravitate to his naturally high and energetic voice. He was only doing this part time but he soon started to attract lots of views and grew a following of over 4 million.

He’s even branched into his own Youtube kids show called Wonder Quest, which has been received very well by families and press.

Stampy is 100% kid friendly along with his friends CaptainSparklez and iBallisticSquid. DanTDM, or TheDiamondMinecart, is another family friendly Youtuber. You can feel safe having your kids watch these shows, though be careful of Wonder Quest caption fails – YouTube’s auto-closed captioning has been known to put bad words in accidentally.

Beyond this safe and tame group for the little ones lies a very vulgar and absolutely NOT family friendly group of Youtubers.

One such is PewDiePie. This foul-mouthed Swede, while not always doing a Let’s Play video, does exude an aura of lowbrow humor that only drunk fraternity brothers would appreciate. His language is R rated and anyone under 16 should be blocked.

Among the many others to avoid, SkyDoesMinecraft is the biggest LP MC to keep on the no-no list for your kids, while Yogscast and VanossGaming concentrate of more mature games, typically rated M like Call of Duty and Grand Theft Auto.

All in all, just like the internet as a whole, Youtube is a vast wasteland of content which can be kid or not kid friendly. Moms and dads needs to be prudent in their supervision just like any activity. After all, among this new generation, they are now consuming more online videos than television.

With the rise of Let’s Play, parents need to be extra vigilant that that kids are not exposed to language and visuals not appropriate for their age. The rise of sites that report on Youtubers are way to gauge what’s going on in the Youtubiverse and keep a pulse on the ever changing video landscape.