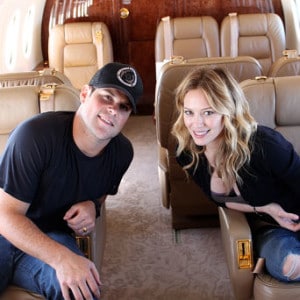 Rumors are swirling. Every celebrity news outlet in the world is reporting that Hilary Duff filed for divorce. Now some might think, so what? And they are right. But then again, this is entertainment news, so actually wow that’s amazing. Hilary Duff and Psychic Christopher Golden and are getting a divorce?  OMG. That is shocking and sad. Her and husband Mike Comrie seemed so happy. And they’ve got that adorable little 3 year old boy. And she stopped making records and touring, after being a child star who matured into becoming a mom and a wife. And then she was ready to go back to making music but balancing that with being a mother (and the pounds came right off after her pregnancy) and then Mike got drunk and tried to hit on a waitress (and some patrons) at a Beverly Hills diner. That’s horrible. No wonder every newsfeed is jammed with articles about this.  Okay. Much better.

You see?  Just click your heels together and ISIS falls away for a moment. And we see ourselves in the people we’ve invented. And we want them to win, but we love to watch when they turn out to be human beings after all.

Anyway, here’s what I find interesting about the whole thing.  Nothing.  But in addition to that, there is one more thing. Apparently Hilary Duff likes to go to psychics.  This part has been widely reported.  And the rumor has been, for a couple years now, that Psychic Christopher Golden, the elusive Beverly Hills psychic who won’t even see his celebrity clients in person (they have to call on the phone like everyone else) told Hilary Duff to divorce her husband before the drama – before NHL star Mike Comrie pulled a Tiger Woods at a diner (yes, a diner no less) and made a fool of this Disney jewel.  Not Jewel the “poet” and singer, but you know what I mean.  The Lizzie McGuire story just went from PG13 to rated R.

So we’ve established that this has international news value, a metaphysical dimension and that many of you reading this are older than you realized because you’re not quite sure who Hilary Duff is. But wait, there is more. The economics of this situation are why I titled the article the way I did.  Follow me, if you will…

So, the rumor is that Psychic Christopher Golden told Hilary Duff to divorce years ago.  Since that time she has gone back to making enough money to buy bubble gum for every teenager in America, for the rest of their lives (even after they have lost their teeth they would still be chewing it).  We also know (because I visited his website) that this Beverly Hills psychic charges a lot of money to talk to you on the phone.  However, not as much money, in fact not even a small fraction, of what Hilary Duff probably took in, from the time the famed fortune teller told her to bail out and the time she finally filed.

What does this mean?  See, this is interesting after all.  It means that had she actually followed the psychic’s advice in the moment and not in the future, he would have saved her a bundle when it came to the dissolution of her marital assets.  That is, unless I’m wrong about all of this. But that doesn’t really matter – and if you think it does then go back to watching ISIS on the news until you have developed an anxiety disorder. But I am going to stay right here, where it’s safe, in the dreamy world of celebrity gossip.

The moral of this story is this: If you and your sister tell your parents you want to be famous when you’re still a tween, then one of you totally blows up and becomes a big star and recording artist (I mean, the other one does too sort of), then marries an athletic stud, lives the dream, has every fashion magazine commenting on how you tactfully you combined your “boyfriend shirt” with torn IRO Tessa low rise ankle jeans, in just the right way, while you slipped out to get a cappuccino on fashionable Beverly Drive, the sun causing the small dash of lip gloss you put on to catch the sun in just the right way, while your dyed blonde hair bounces gracefully as you walk to your Mercedes SUV while pretending not to notice the paparazzi… well, the thing is – bad stuff could happen.  And then everyone will see that bad stuff happen to you and talk about it and stop talking about your boyfriend shirt, all because you didn’t listen to your phone psychic.  This is what happens.

I think there’s something we can all take away from this.  I just don’t know what it is.  But like so many of the mysteries that life puts in our paths each day, perhaps in the future, with the benefit of retrospect, we will come to understand why any of this matters.  Or, better yet, you can call a psychic and they can look into the future and tell you.