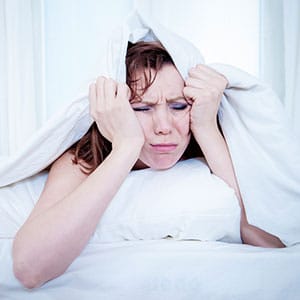 Rapid eye movement (REM) sleep behavior disorder makes people act out whatever it is that they are dreaming about! This can include such things as hitting, shouting, screaming, walking, etc. That is why it is also called “dream enacting behavior”.

REM sleep behavior disorder can sometimes cause injury to the person who has the disorder and even to the person sleeping next to them. It can be brought on suddenly after years of just twitching or jerking during the sleep cycles of REM sleep.

When we sleep, we go through three sleep cycles-wakefulness, REM, and N-REM. The rapid eye movement phase is characterized usually by muscle paralysis that is temporary (which is why most people do not enact their dreams when sleeping!). You spend at least 20% of your time sleeping in the REM state. The REM sleep occurs over several times during a single night’s sleep.

When the person wakes up from the episodes brought on by REM sleep behavior disorder, he or she is always alert and awake. There is no confusion or disorientation.

How is it caused?

REM sleep behavior disorder can be caused by lesions in the brain stem (as seen in studies on animals), as well as other underlying neurological conditions such as Parkinson’s disease, dementia with Lewy bodies, or even multiple system atrophy.

The neural pathways that cause the temporary paralysis of your muscles during REM sleep do not work, giving your muscles all the permission to act out your nightmares or dreams.

There might be other factors that cause this disorder, such as exposure to pesticides, smoking, head injuries, withdrawal from alcohol or drugs, or using the latest antidepressants.

You are also more prone to REM sleep behavior disorder if you already suffer from daytime drowsiness excessively and fall asleep all of a sudden (narcolepsy). This is itself is a chronic sleep disorder.

What are the symptoms?

How do you know if you have REM sleep behavior disorder of if you are just going through a few random nights of nightmares where you vocalize or act out your dreams?

This sleep disorder can be diagnosed at sleep centers which conduct sleep studies. You will be monitored the whole night for all activities of the brain and muscles to observe for any inhibition of the muscle paralysis that is typical of REM sleep cycles.

Other than this, you can ask your family members or friends about their observations of you during these REM sleep cycles. Typically, you also will be able to remember whatever it was that you were dreaming very clearly. Others would be able to observe you making noises, talking, laughing, or crying. There will also be movements associated with your arms or legs that are often violent in nature, like flailing your arms, kicking, punching, even jumping up from the bed.

If you suspect that you have this disorder, it would be wise to make an appointment with a sleep specialist. It would be even more helpful if you maintained a sleep diary for about two weeks prior to your appointment as well as note down all the medications you have been taking.