Home / Health / What is Premenstrual Dysphoric Disorder or PMDD? 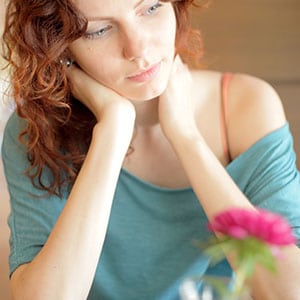 Each month, around 3-8% of women suffer from a debilitating, frustrating, and poorly understood condition known as PMDD or premenstrual dysphoric disorder. While almost everyone knows about the common, lunar-bound demons of PMS (according to the American College of Obstetricians and Gynecologists around 85% of menstruating women have at least one PMS symptom), PMDD is as yet relatively obscure.

For sufferers, the worst aspect of the disease is the fact that it masquerades so well as simple PMS. This is because it displays all the same symptoms, but to a far greater severity. It makes it very difficult for the disease to be recognized, with many sufferers being accused of over-playing their PMS symptoms. But while PMS is a very manageable condition, PMDD can wreck lives.

Most women know how it feels to be a little teary a few days before their period is due, perhaps lacking in self-esteem and ready to snap at the slightest provocation. In PMDD, all the normal symptoms of PMS (sadness, emotional instability, irritability, brain fog, cravings, etc.) are exaggerated to the extreme. Women with PMDD don’t feel sadness, they feel extreme despair. They don’t feel irritation, they feel uncontrollable rage. They don’t just feel a little “on edge,” they feel like they are losing their minds. According to the DSM-5 (the Diagnosic and Statistical Manual used in the diagnosis and treatment of mental disorders), in order for a diagnosis of PMDD to be made, women must experience all of their symptoms to a “clinically significant” level, causing interference with their daily lives and relationships.

The inclusion of PMDD in the DMS-5 is, of course, controversial, as many women feel that their condition is not mental but physical. Although the condition does have a hormonal basis, it has been found that women with a history of depression and a subjective sense of being discriminated against are more likely to suffer from PMDD.

So what is this condition and what can be done to help sufferers? At the moment, scientists don’t know what causes PMDD. Sufferers have been shown to have normal hormone levels, just like women with PMS. Variations in the estrogen receptor alpha gene and another gene known as catechol-o-methyl transferase (which is involved in mood regulation in the prefrontal cortex) have both been associated with PMDD, but as yet the only treatment is with anti-depressants. Patients are recommended to avoid stimulants including caffeine and alcohol, to relax regularly, avoid stress, and eat a healthy diet. Some women have reported success with natural supplements such as 5htp (or L-tryptophan), St John’s Wort, SAM-e, Vitex agnus castus, Evening Primrose Oil, magnesium, vitamin B6, and others, but it seems there really is no magic formula, with every patient’s experience being markedly different.

Sadly some women have resorted to a total hysterectomy to relieve their symptoms, after finding that herbal remedies made no difference and anti-depressants came with too many unpleasant side effects. This may seem extreme, but PMDD can cause extreme suffering.

Some hope is offered by Dr John Studd of Lister Hospital, London, who has reported success in treating women with PMDD with a combination of transdermal estrogens (either implants or patches) and the Mirena IUD or “coil.” The estrogens stop ovulation altogether, while the IUD prevents the excessive growth of the lining of the womb that would happen without menstruation. Whether this will become the first line treatment for the condition in future remains to be seen, but what is clear is that a treatment other than psychiatric drugs is certainly required for this hormone-related condition.

Brought to you by SimpleRx