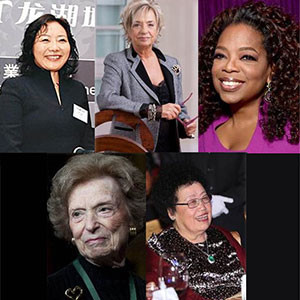 Aged in her early 50s Wu Yajun was born in the year 1964 of a very ordinary family in china. She got her graduate degree from NWPU (Northwestern Polytechnical University) and started working at a meter factory. In the later years she moved on to become a journalist and editor at China Shirong News Agency. Wu Yajun along with her former husband founded a real estate company which was doing well and it was later renamed to Longfor Properties. The real money came when the company was listed on SEHK (Hong Kong Stock Exchange), Wu now owns about 45% of the total stake in the company making her the 3rd richest woman in china & 22nd richest woman across the world.

Thanks to FDI (Foreign Direct Investment) most of the world today knows “Zara” the iconic retail brand who sells clothing and accessories. What a lot of people don’t know is that Zara was found by Rosalia Mera a Spanish lady along with her husband back in 1975 working their way around to make Zara the world’s largest trend setting fashion retailer. Born in 1944 she was a Spanish businesswoman who helped the world become jazzy and died as the world’s richest self-made woman in the year 2013 due to complications from a stroke.

She was born in 1954 in a poverty stricken underprivileged family to a teenage single mother. This was not the end of her struggle as she was raped at the age of 9 and had a miscarriage at the age of 14. What helped her become a billionaire and a well-known personality among American Households is “The Oprah Winfrey Show”, this show won many hearts due to its penetrative power among the modern American families related to sensitive issues. Oprah’s show also won more than 40 Daytime Emmy Awards which are equivalent to the Academy awards for movies.

Born in 1932 and now retired she is wife of Donald Fisher, they both founded the famous clothing store “The Gap”. First store of the brand came back in the year 1969 and now it has crossed well over 3000 mark. The brand is headquartered in San Francisco, California, has around 135,000 employees & also listed on the New York Stock Exchange. The business is now in the hands of her descendants Robert Fisher, William Fisher & John Fisher.

She was born in 1941 in a poor family at Summer Place of Beijing, China. Chan founded and is now the chairperson of Fuwah International Group which deals in commercial real estate. Some of their benchmark properties are Jinbao Towers, Regent Beijing, and Chang’An Club etc. The company also operates one of the largest private museums in china known as China Red Sandalwood Museum where Chan Laiwa also serves as a curator. She now lives & spends most of her time inside her museum.